The plot is set in the Cretan uprising of 1889. The central character, a wild, insubordinate warrior named Kapetan (rebel leader) Michalis, has sworn to remain unshaven and dressed in black, and not to laugh until has been freed. But when he meets Emine, wife of his blood brother Nurey Bey, he is overcome by a "new demon"; for all his efforts, he cannot get her out of his mind.

While Kapetan Michalis struggles with his demon, Nurey Bey challenges Manoussakas to a duel to avenge his father's death. He kills Manoussakas, but is wounded in the genitals. This wound heals, but Nurey Bey commits suicide, being unable to bear the disdain and pity Emine shows him over his mutilation, while she becomes mistress to Kapetan Polyxigis. News of Nurey Bey's death adds to the already charged atmosphere in Megalo Kastro, where news of skirmishes and riots all over the island arrive daily.

On the instigation of the agas, Turkish soldiers pour into the streets to wreak carnage and set fire to the city. A few days later, the revolution breaks out. War is raging and the Turks lay siege to the Monastery of Christ the Lord. At the same time, Emine readies herself to be baptized a Christian, but Kapetan Michalis arranges that she is kidnapped and hidden in a house belonging to one of his relatives. On the most decisive night in the entire siege, he leaves the monastery to go and kill Emine; on his return he finds it has been set ablaze.

Shortly afterwards, Kosmas (son of Manoussakas and nephew of of Kapetan Michalis) arrives on , bringing word to the revolutionaries that others have capitulated. One by one the rebel leaders lay down their arms, but Kapetan Michalis refuses to yield. Kosmas goes to his hideaway to bring him around, but ends up staying, having felt the shadow of his own father rise up within himself. In the heat of battle, he realizes that Kapetan Michalis has freed himself of all fears and hopes. Shortly afterwards, uncle and nephew fall dead during the final Turkish assault. 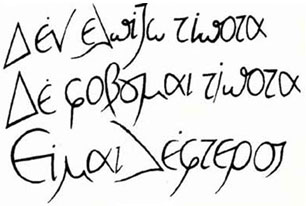